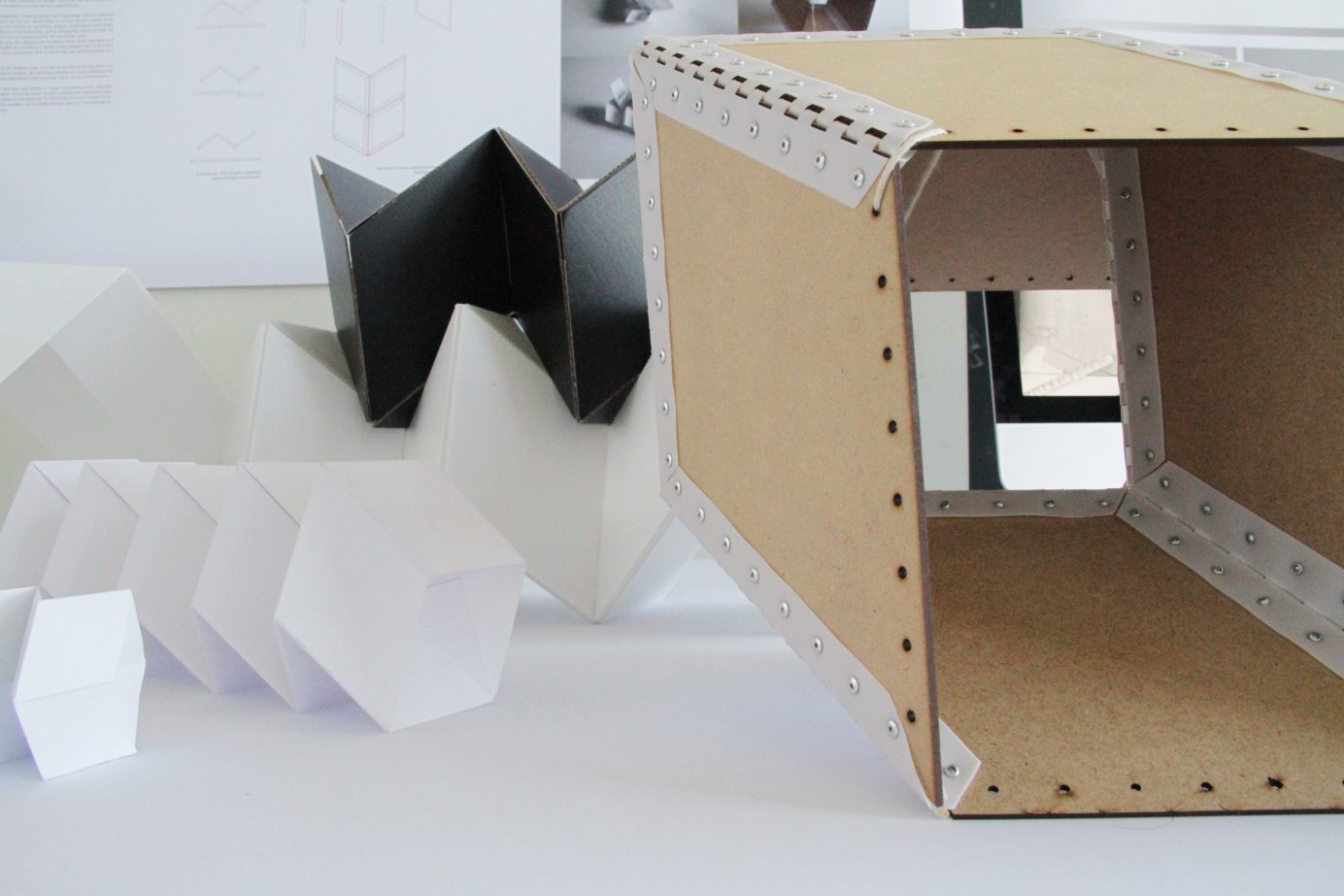 CONTEXT
In conjunction with the design studio ‘City Lab’ students are invited to join the ‘städtebauliche Vertiefung’ titled ‘Make Material City Lab’. The module allows students to engage with the design and decision-making method ‘research by design’ and ‘research by making’. It aims to address the discourse on mass-customization through individualized digital fabrication together with bio-technical artifacts and structuring through analog material behavior. Both go hand-in-hand. Objective of the module is to arrive at a structurally informed prototype for architecture, based on an understanding of the inherent, logical properties of material behavior and their corresponding collective assembly logic derived from its immediate environmental influences. Digital and analog: Attempts would be made to abstract rules governing the component’s behaviors into codes, in order to algorithmically/parametrically generate and further formulate new (but equally workable) iterations of prototypes and architecture. 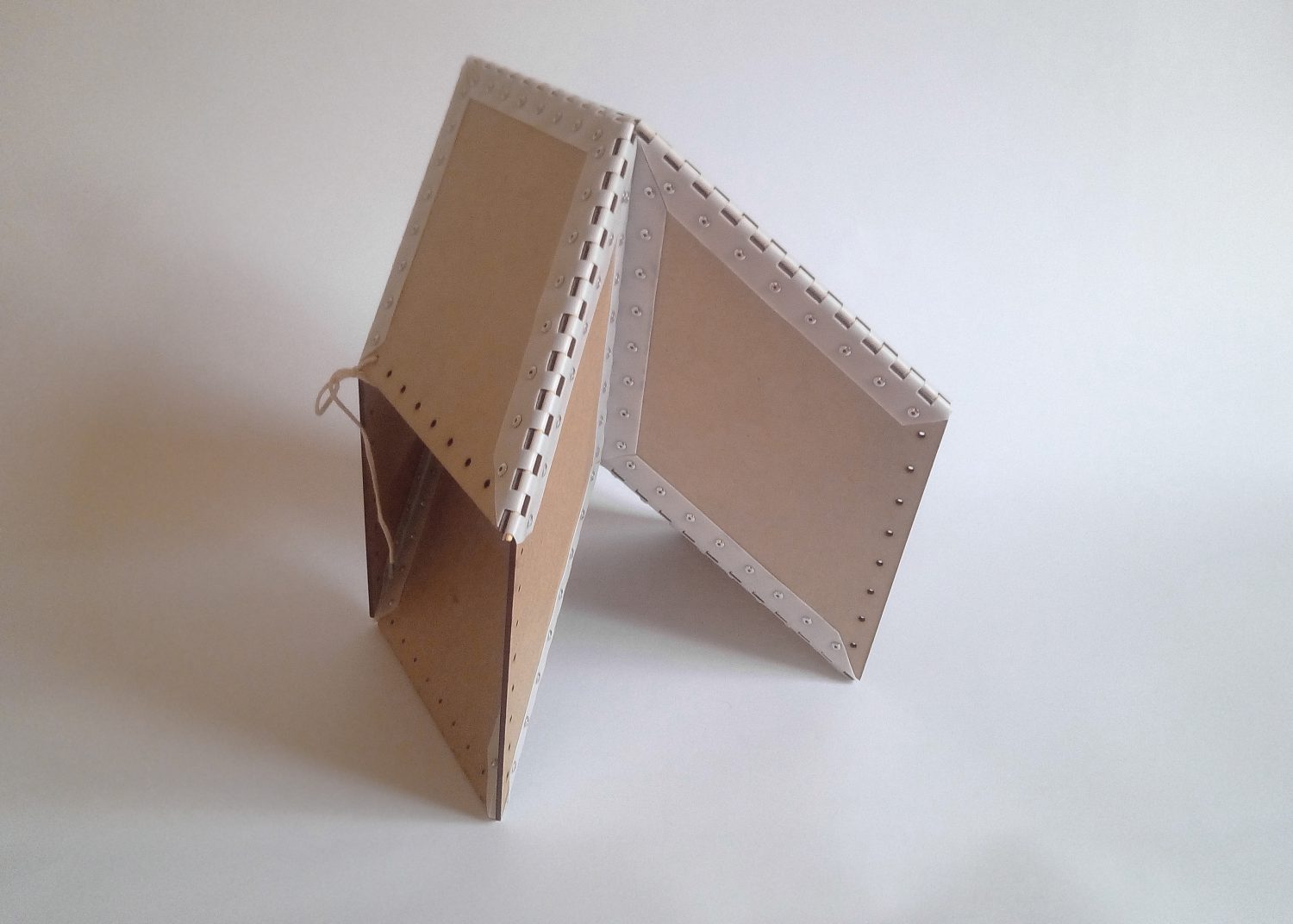 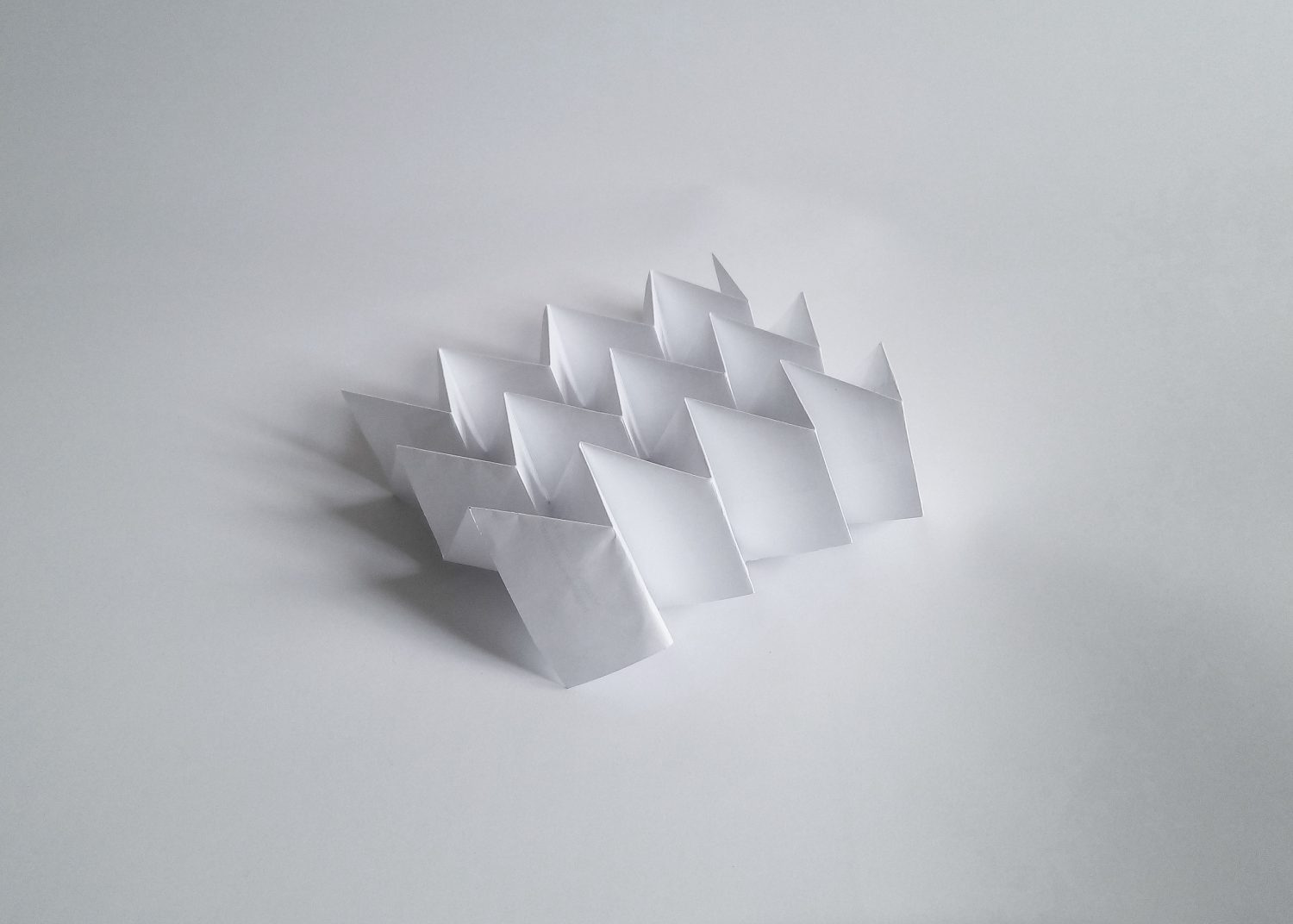 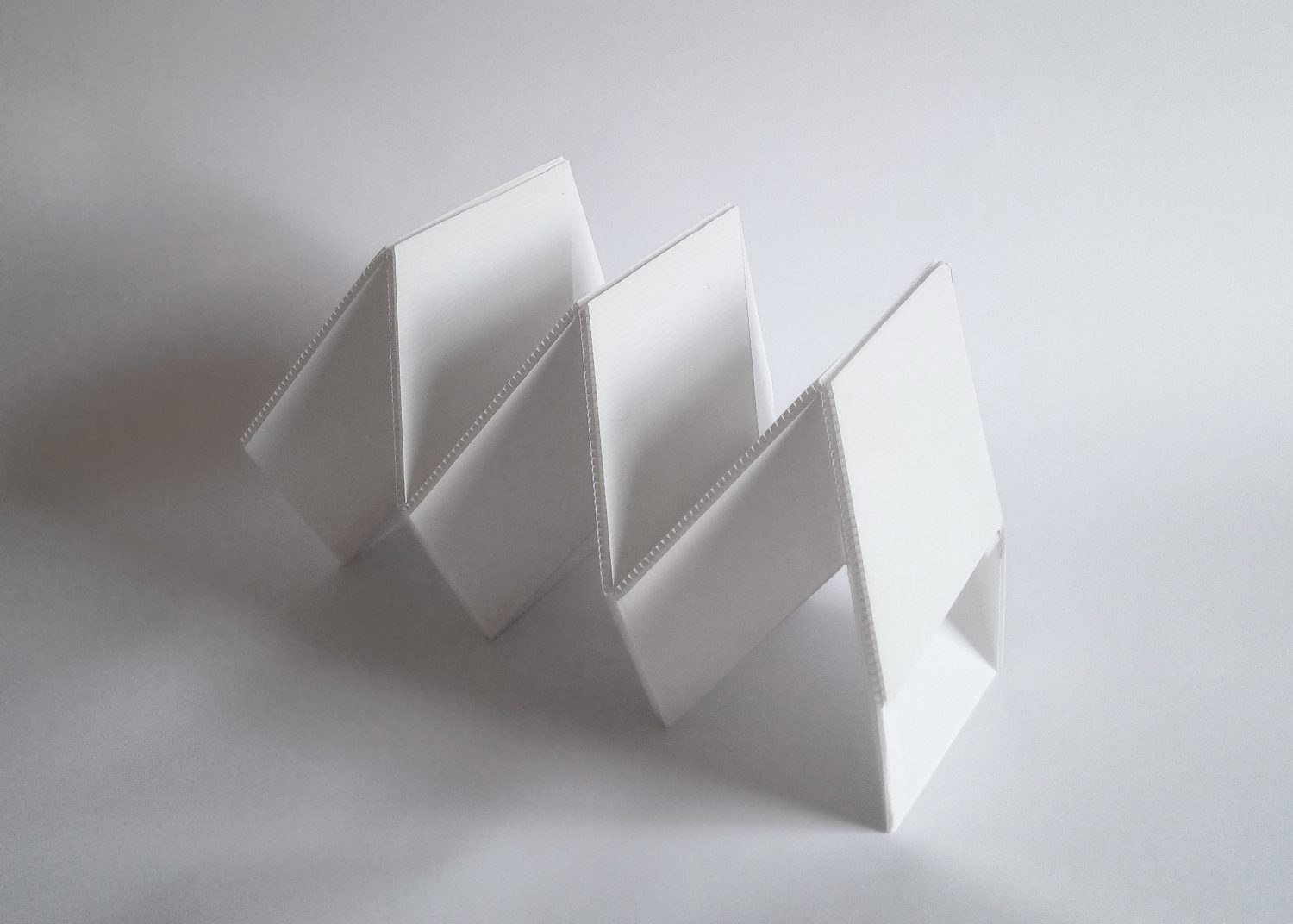 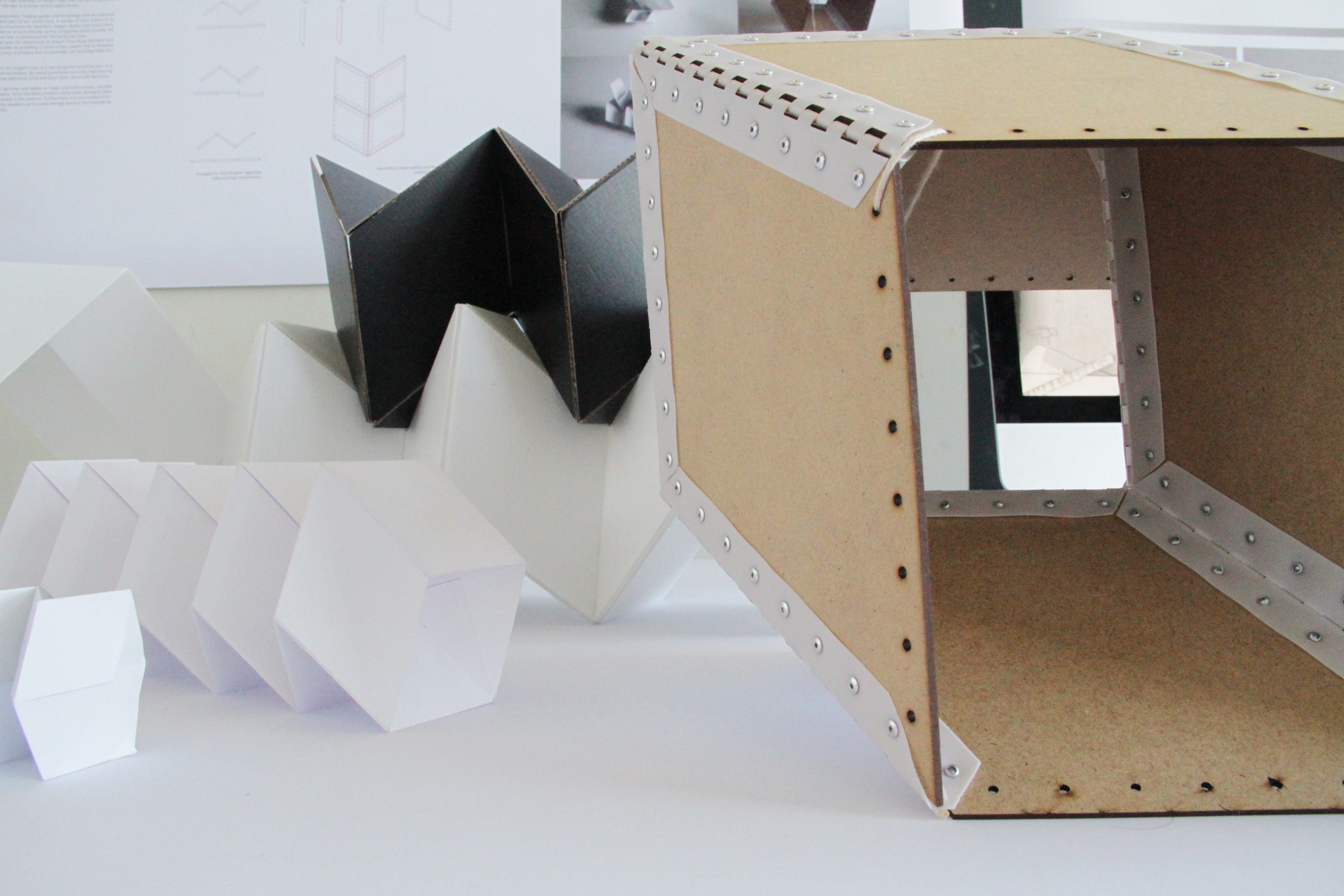 The ancient Japanese art of folding paper Origami inspired architects, designers and engineers in recent years, because of its wide structural and kinetic potentials.
Rigid Origami patterns are piecewise linear and allow continuous motion without deformation of their facets. Whereby they realize a deployment mechanism with stiff panels and hinges that can be transferred to sheet materials departing from paper.
Mathematically Origami is to be seen as an ideal zero-thickness model that is physically impossible. This especially gets visible when adding thickness to the Origami model. Therefor it requires a special hinge that copes with thick panels to convert deployable Origami structures into a larger scale.
Thus diverse strategies have been developed to accommodate thickness in origami based design, which lead to varying structural and kinetic properties. For instance a shift of the rotational axes to edges of panels was proposed (Hoberman, 1988, Trautz and Künstler, 2009). Other studies used a membrane attached to trimmed panels (Zirbel et al., 2013) or offset each panel from a selected joint plane and extended the rotational axes back to the joint plan (Offset-Panel-Technique, Edmondson et al., 2014). However, every method goes along with a shift of the load tracing apart from the center of the panel. Referring to the studies of Filipov, Tachi and Paulino (2015) this paper is concerned with an Origami tube based on the Miura-Ori pattern (Miura, 2009) that consists of equal parallelograms. It showed special folding and static properties depending on the degree of extension.
This paper proposes a hinge mechanism that accommodates thickness in the Origami model while keeping the load tracing in the center of the panels to create load-bearing modules of sheet material with a high stiffness-to-weight ratio that can be combined to various forms and deployed for storage. 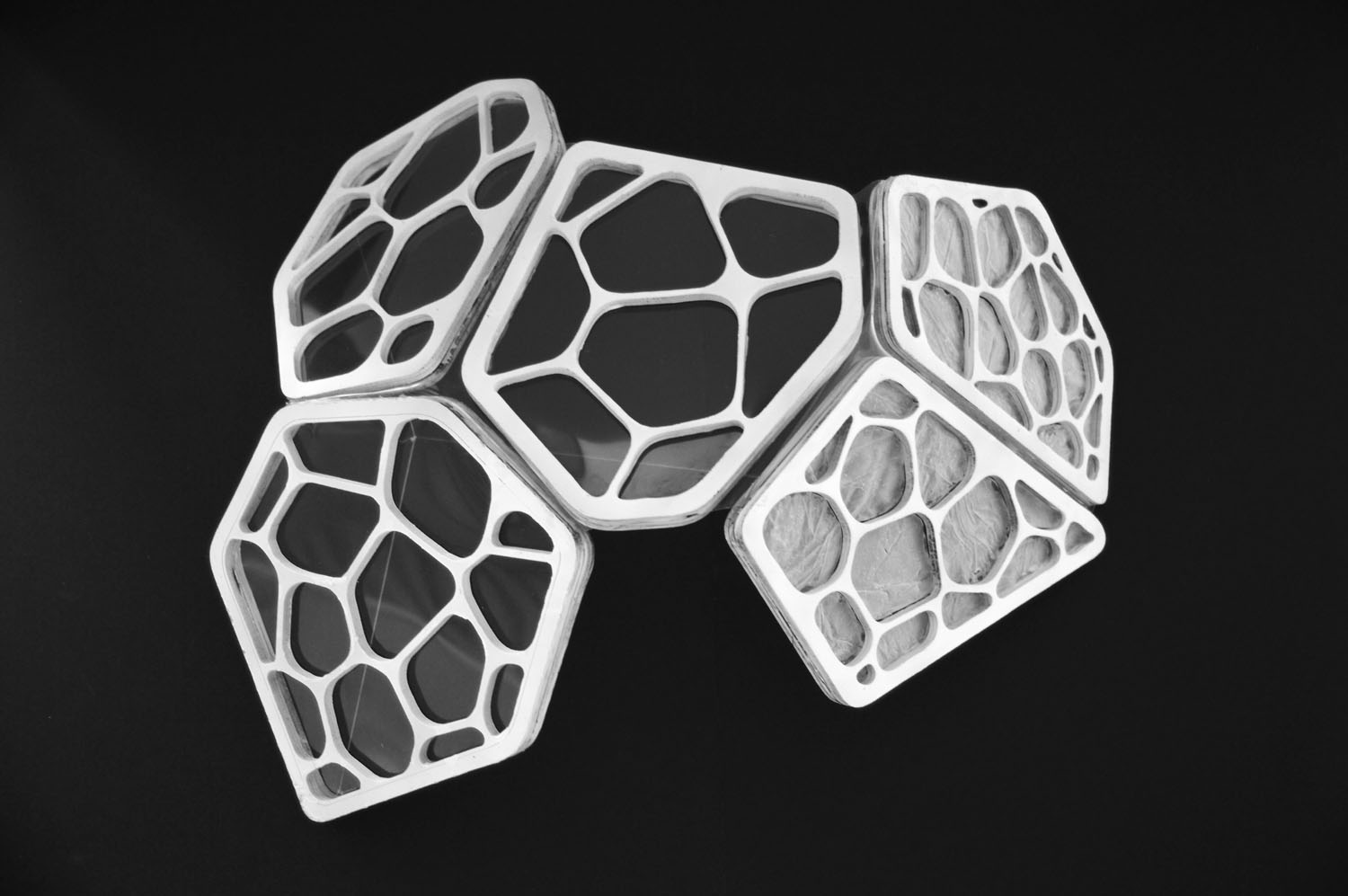 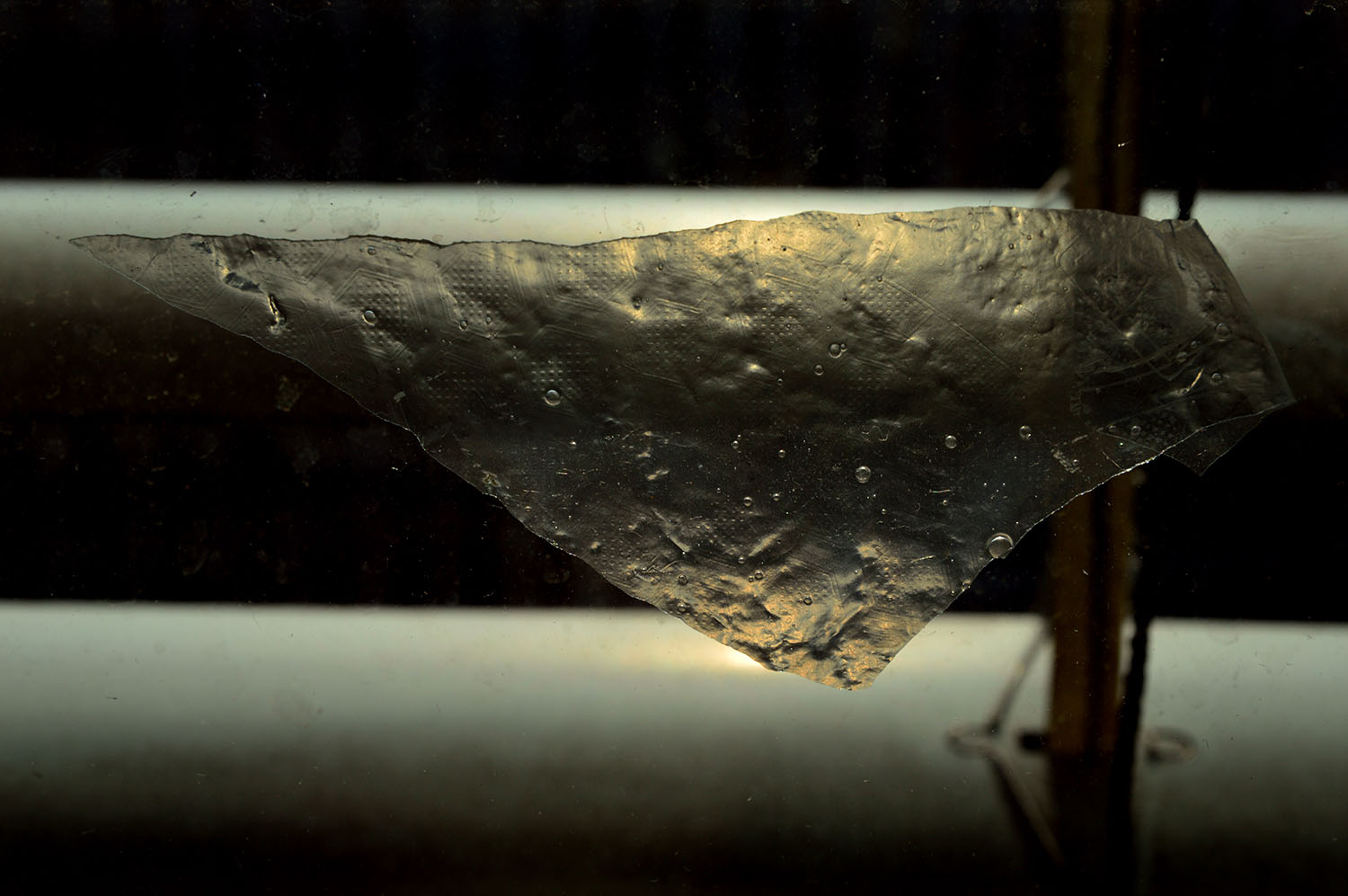 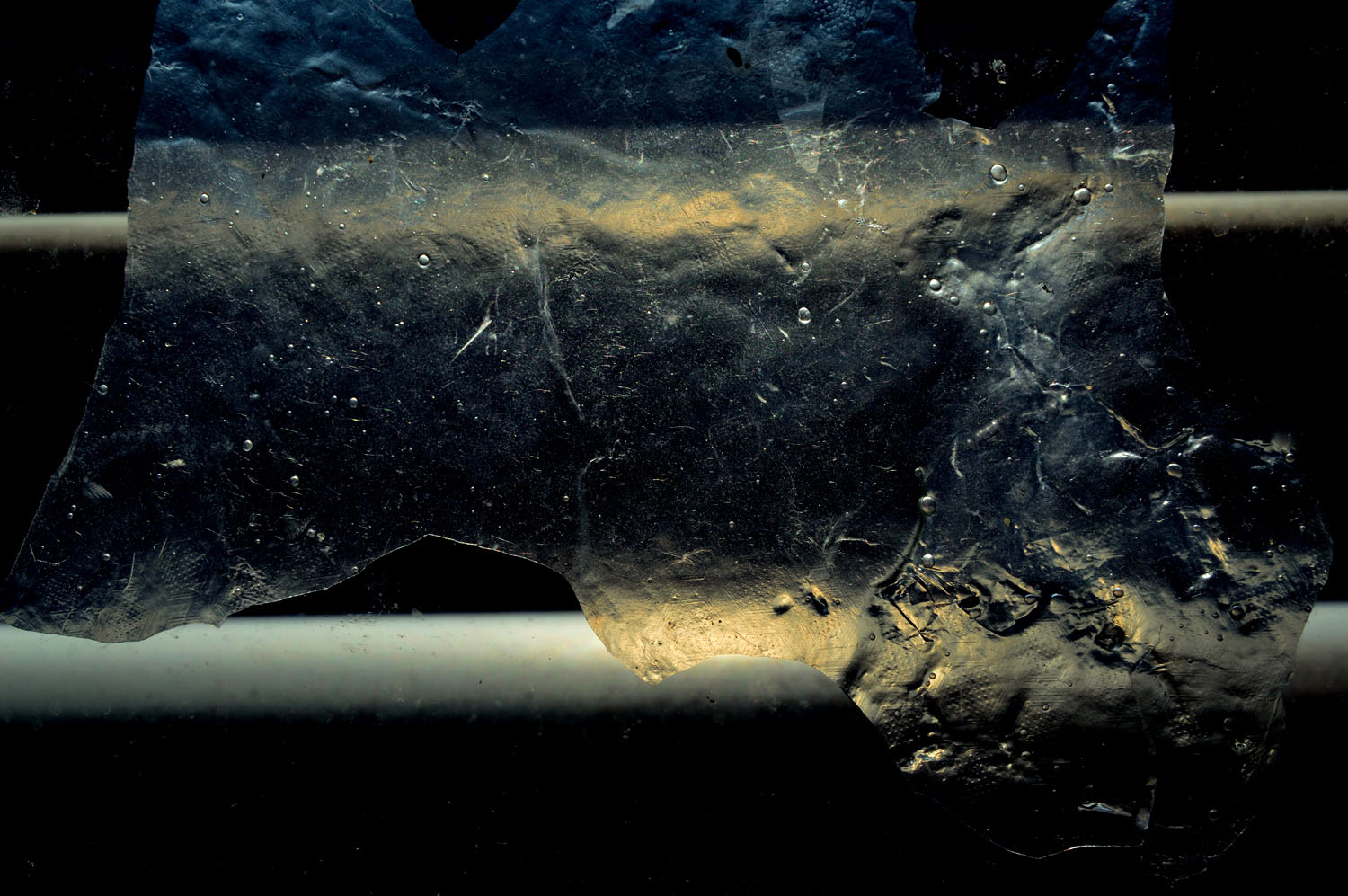 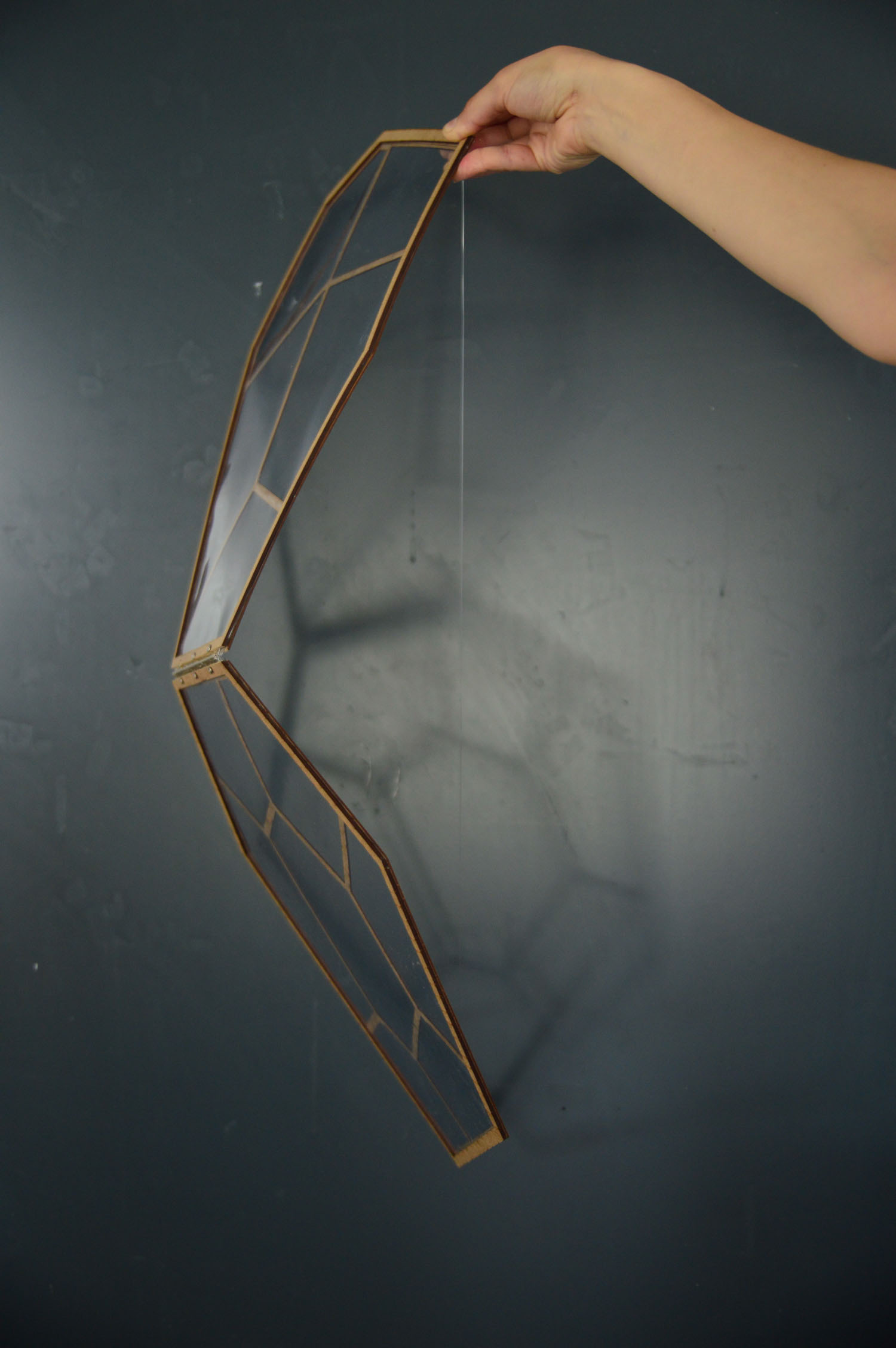 ‘Bioplastics as ‘infill’ paneling component to a voronoi tesselated structure’

This project tests the possibilities of adopting to the usage of bioplastic as an infill material for paneling components to a Voronoi­designed structure, outlines the benefits of their behavioral attributes and exploits its material capabilities. Curved surfaces prevail a higher degree of complexity than fl at surfaces. Tessellation, smoothens these curved forms by breaking down the connected geometries. Digital fabrication enables through tessellated construction methodology and standard­size sheet materials, the realization of complex forms and surfaces. A tessellation architecture adds a new visual, spatial, and tectonic dimension (Kolarevic, Branko, 2003). These attributes of tessellation architecture are being addressed and highlighted with the construction of our prototype, namely a Voronoi tessellated Pavilion structure with bioplastic infi ll panels. Tectonically, tessellation secures the maintenance of the bioplastic at the right positions by trapping it in­between the two tessellated layers.

The prototype using ‘shape memory alloy springs’ presents a first prototype for a shading device. It derived from a series of folding tectonics, slotting in the hinges, steel springs and copper wiring between the dual layers of the flaps and base. From the previous prototype of developing only a single wings, now six wings had to be integrated with each other to create a closed circuit to centralise the reaction to an external heat source for a uniform opening and closing movement. To achieve this a loop of copper wire is strung through the punctures in the bottom layer of the flaps as mentioned previously above, then the SMA springs are tied from one wing to the successive wing. The pattern created by this connection once again emerges a hexagonal shape although in a different orientation and scale to the hexagonal arrangement of the wings. The material used to construct the final shading device prototype is largely decided upon the idea pairing with the high-tech, limited accessibility and high cost of the SMA springs with something much more relatively low-tech, that is accessible and affordable. This is in order to inspire more DIY projects to encourage and promote the capacity of SMAs to change our daily life from the bottom up. Thus MDF sheets were used to create the structure of the final prototype, but if the shading device was to be built for commercial application lightweight metal or even bioplastics would be much more recommendable. 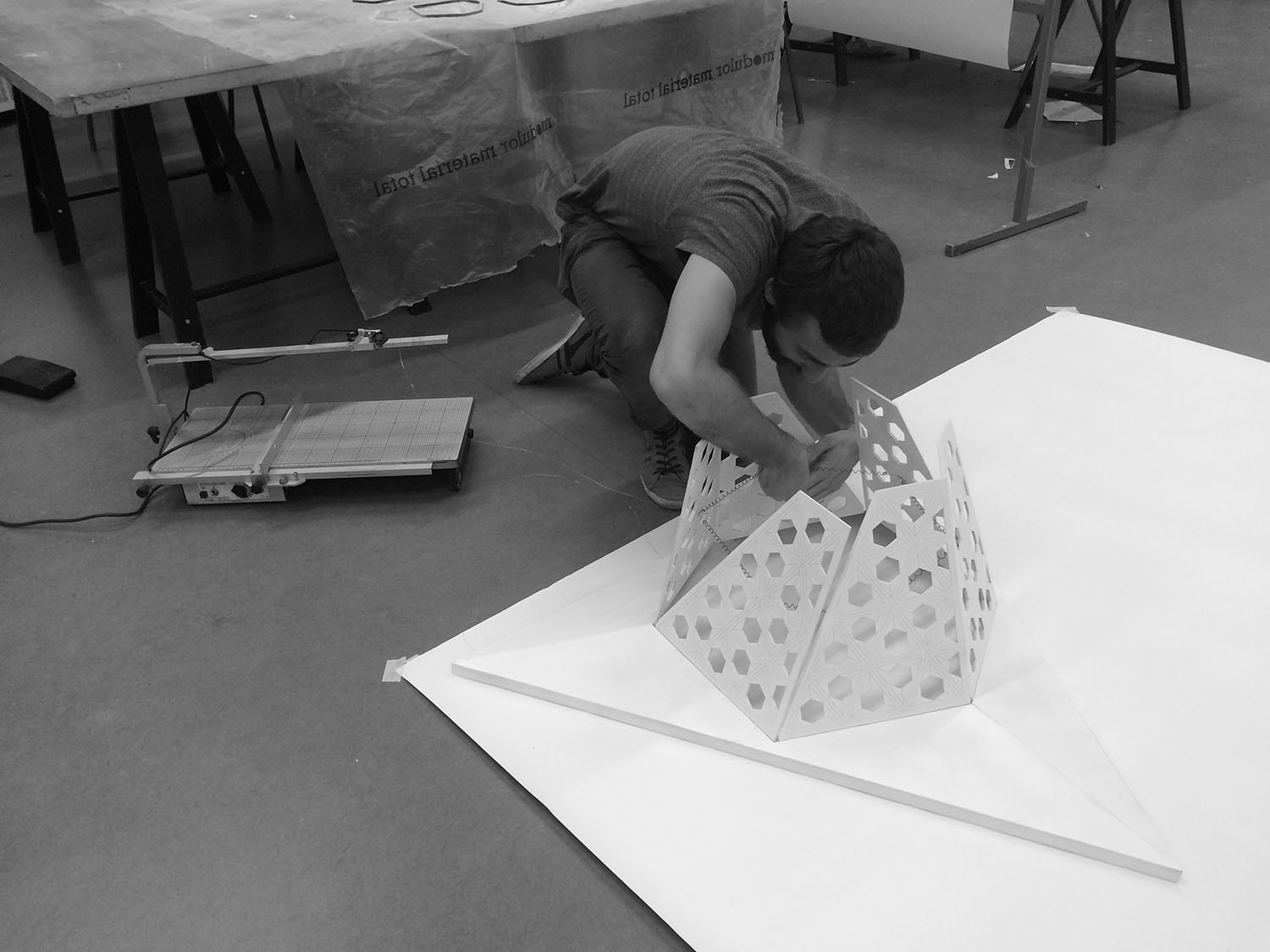 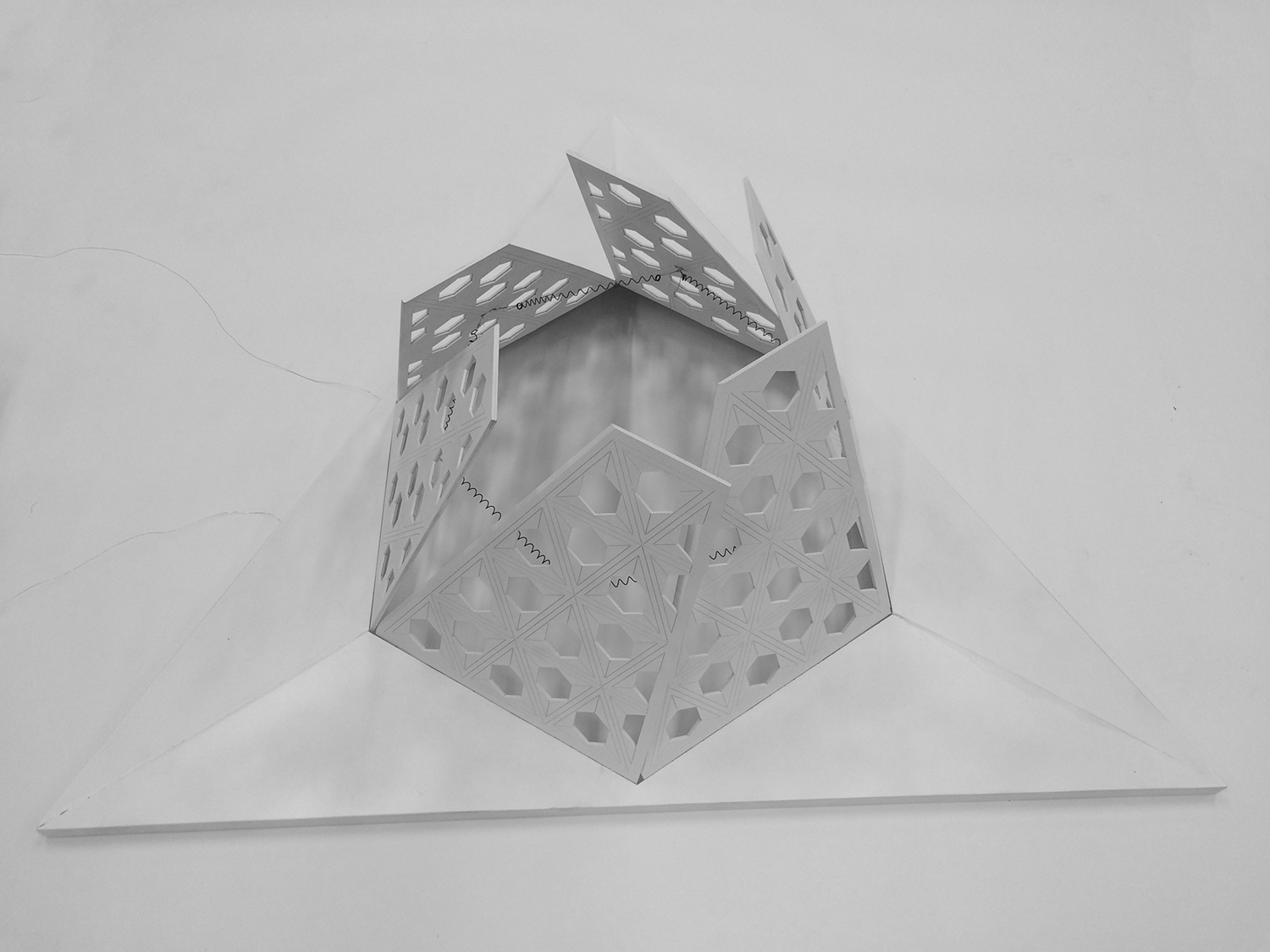 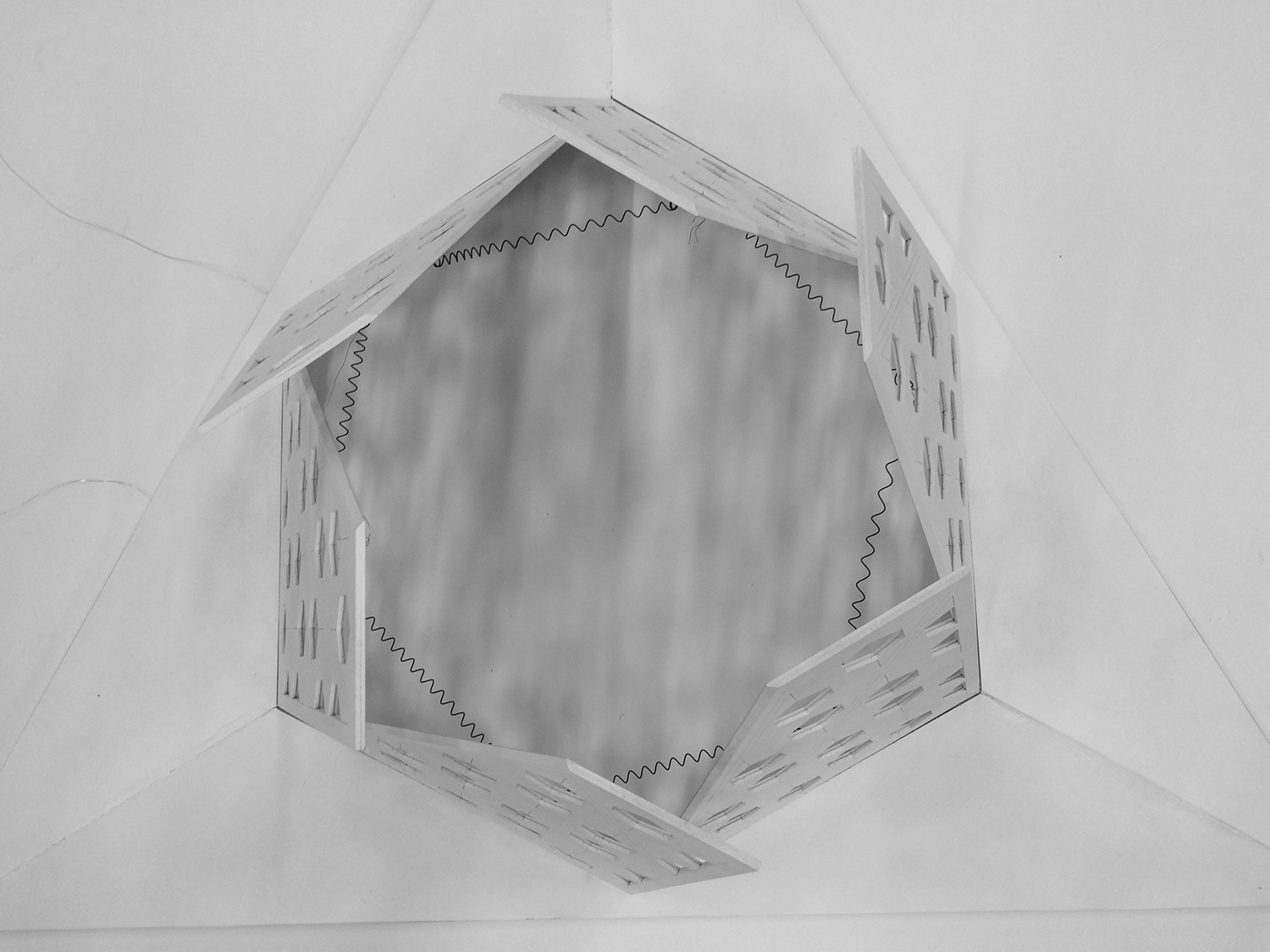 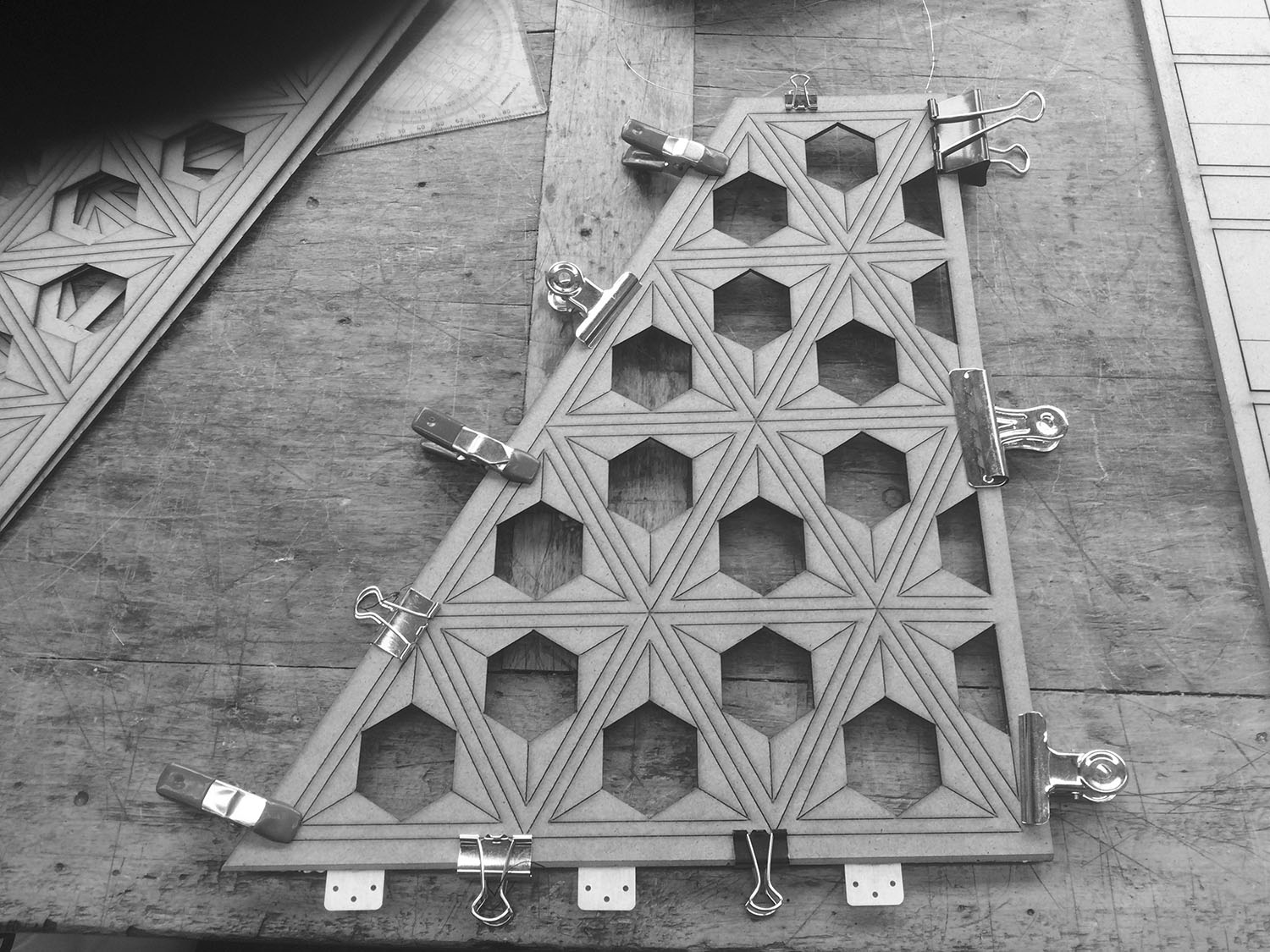 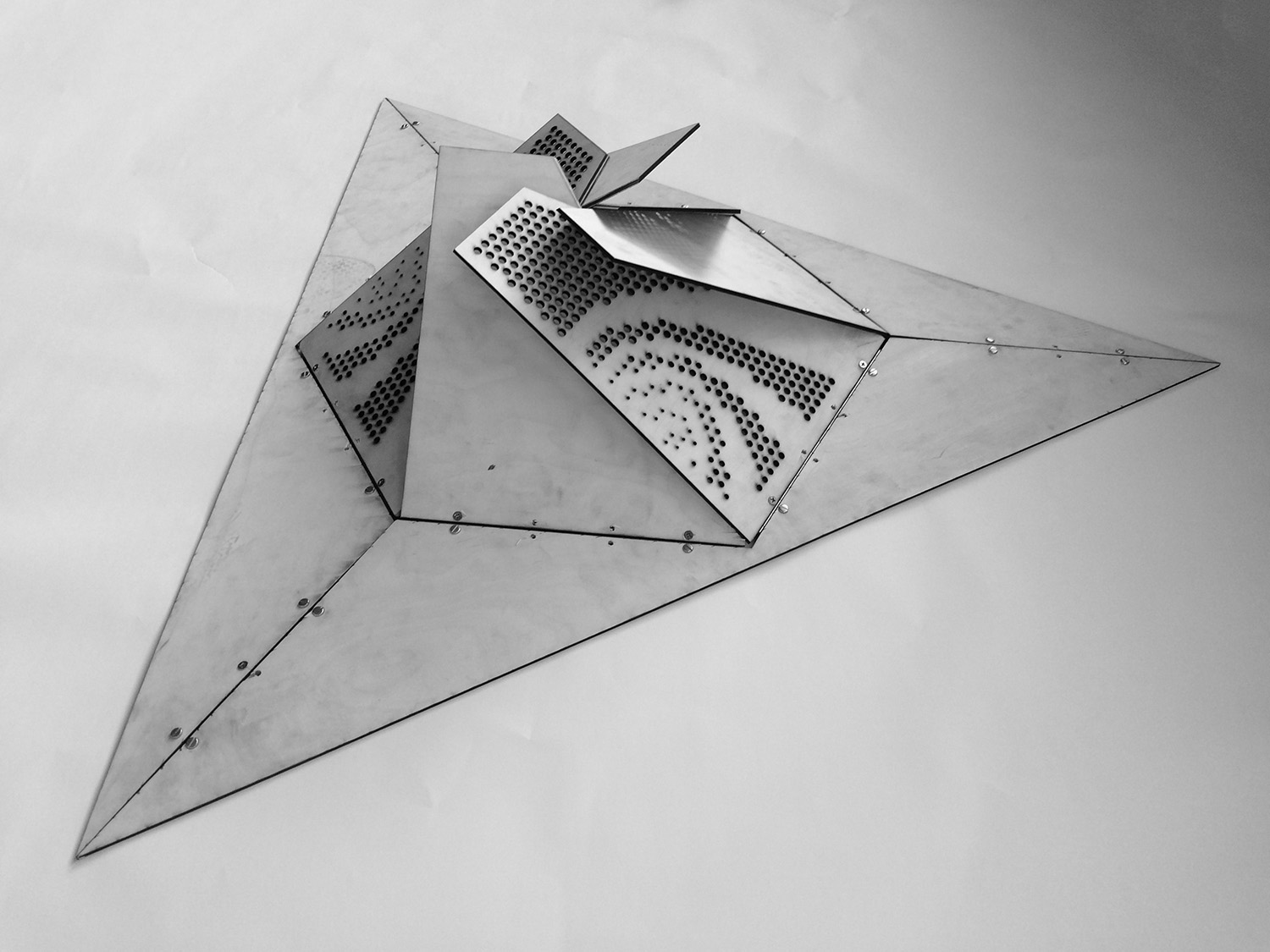 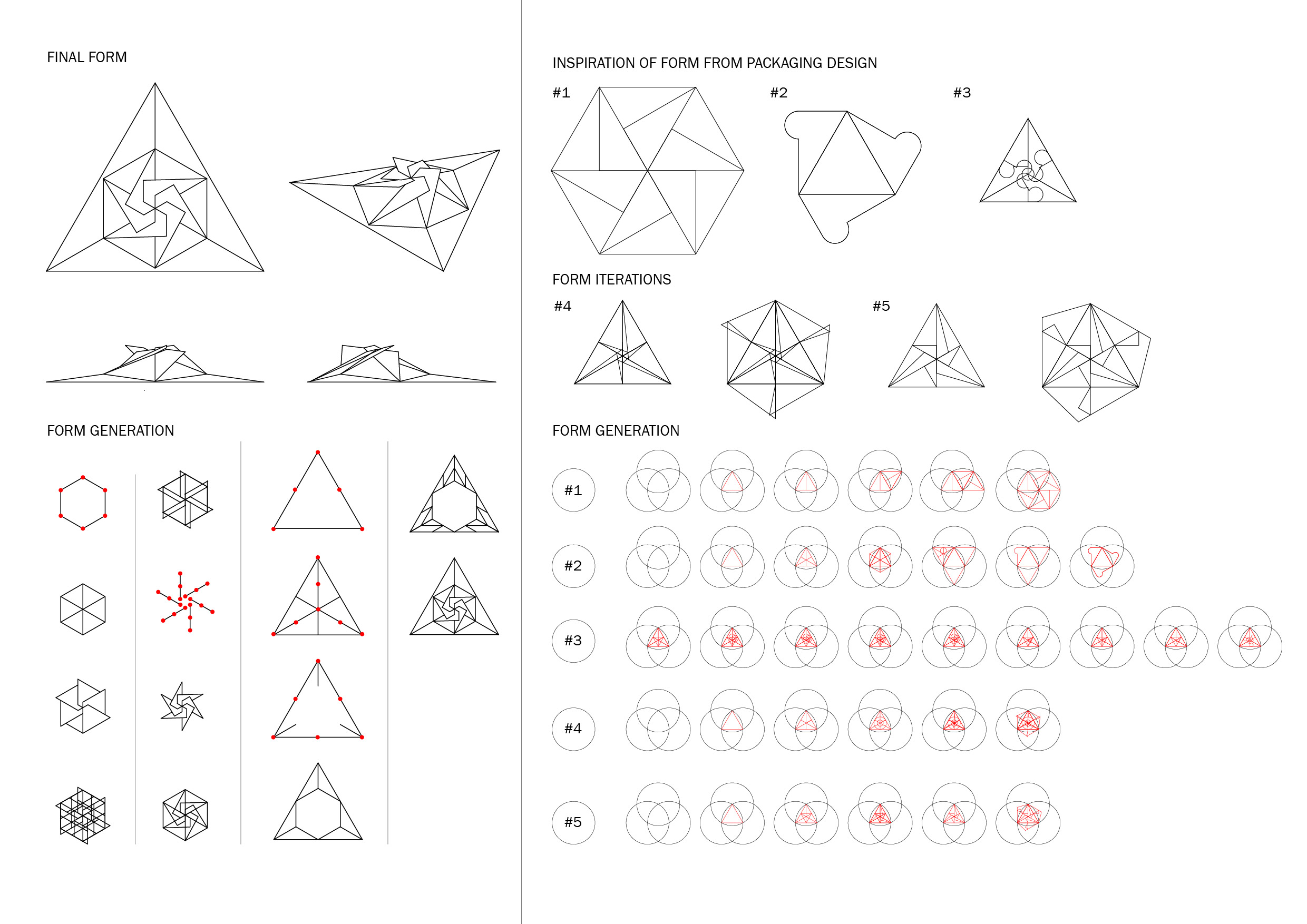