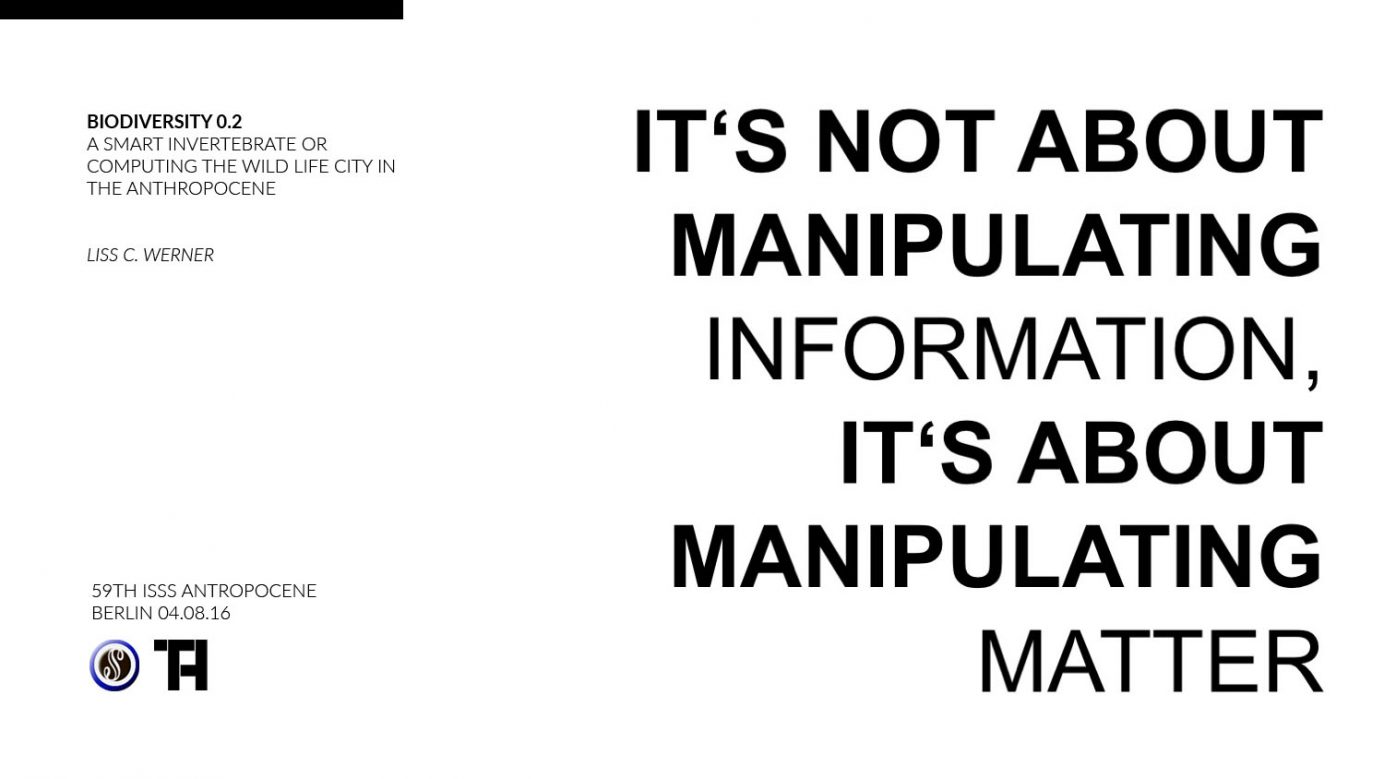 Biodiversity 0.2 – a smart invertebrate or computing the wild life city in the Anthropocene

“Biodiversity 0.2 – a smart invertebrate or computing the wild life city in the Anthropocene” suggests design principles for creating a future habitat for all species, including organic, human, animal and computational devices. The latter describing a rather novel and advancing typology. The concept of biodiversity has emerged strongly during the hippiesque and technophil 1970s, featuring the birth of the Urban Ecology movement, the era of the ‘Whole Earth Catalogue’ (1968) hand in hand with Buckminster Fuller’s ‘Operating Manual for Spaceship Earth’ (1969) and the beginning of extra-terrestrial travel where punch-cards described the interface for a new, a digital human condition (Apollo 11). Biodiversity furthered itself globally with its political advent in November 1988, when the United Nations Environment Programme (UNEP) convened the Ad Hoc Working Group of Experts on Biological Diversity followed by the CBD (UN Convention on Biological Diversity) entering into force into December 1993. At that stage the Anthropocene had been in full bloom; Government policies and regulations, educational strategies and infrastructural development have echoed and followed suit by addressing urban environments through implementing gardens and advancing bicycle paths in the city, prohibiting vehicles that emit polluting substances and generally fostering wild life in the city. And while decision-making bodies still focused on their exclusive and separate fields of expertise, developments in information and communication technology advanced to an interdisciplinary extend, breeding big data that has become too big to house or handle, creating the Internet of things that requires structuring and cultivating a culture in which participative design and open source information have become as usual as conversations between humans and machines.

The paper suggests that biodiversity can and must go further than the mere implementation of discrete spaces fostering nature in urban environments or the monitoring of natural habitat using digital devices, but a full integration into the material world.