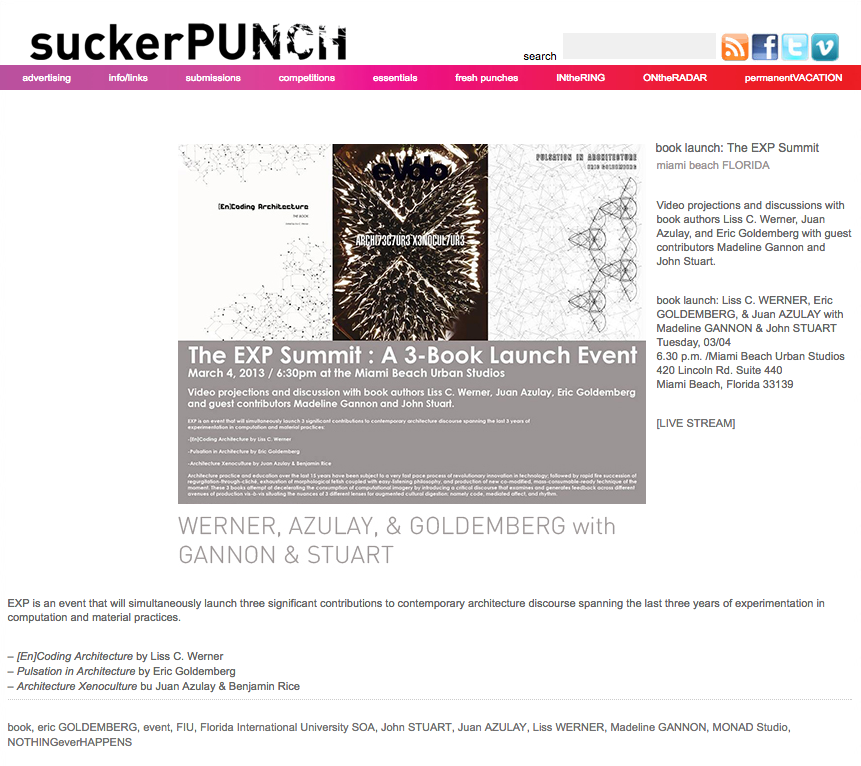 EPX is a symposium that launched 3 of the most significant contributions to contemporary architecture discourse spanning the last 3 years of experimentation in computation and material practices:

– Pulsation in Architecture by Eric Goldemberg

Architecture practice and education over the last 15 years have been subject to a very fast pace process of revolutionary innovation in technology; followed by rapid fire succession of regurgitation-through-cliché, exhaustion of morphological fetish coupled with easy-listening philosophy, and production of new co-modified, mass-consumable-ready technique of the moment.
These 3 books attempt at decelerating the consumption of computational imagery by introducing a critical discourse that examines and generates feedback across different avenues of production vis-à-vis situating the nuances of 3 different lenses for augmented cultural digestion, namely code, rhythm, and mediated affect.

Format:
The event was moderated by Professor Peter Zellner, and was divided in 3 consecutive sessions and a climatic discussion involving all the panelists.

link to the event 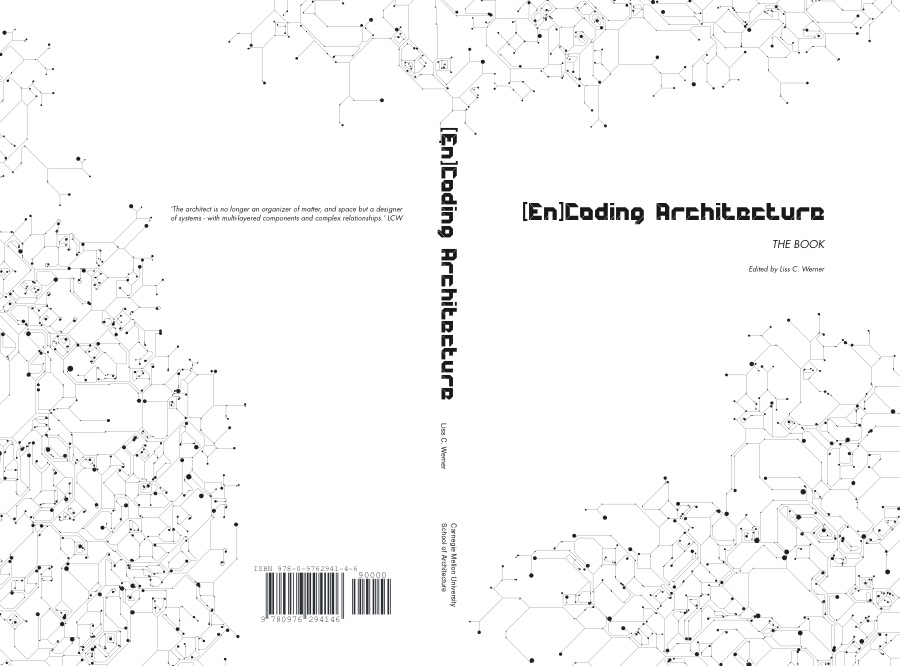 [En]Coding Architecture 2013
[EN]CODING ARCHITECTURE 2013 is the title of a 3-day conference on the autonomy of architecture, code, fabrication, material morphology, robots, machinic desire and computation held at Carnegie Mellon University, School of Architecture in Pittsburgh, Pennsylvania in February 2013. The event focused on the ongoing paradigm shift, or rather state change in architecture and the role of the designer/architect in the age of code, beyond linear communication channels or a clear differentiation of disciplines, which has dominated the profession of architecture since the second industrial revolution.

The book presents an overview of what [En]Coding in Architecture may consist of, how it can be defined and which way a new language and new tools, namely the language and tools of computer sciences, influence computational thinking for architecture and the built environment. It positions the field of architecture as an alloy of programming, digital tooling, art, and science. It synthesizes new trajectories for the profession in a cybernetic context of tectonics, cultural philosophy, architectural theory and geopolitics. 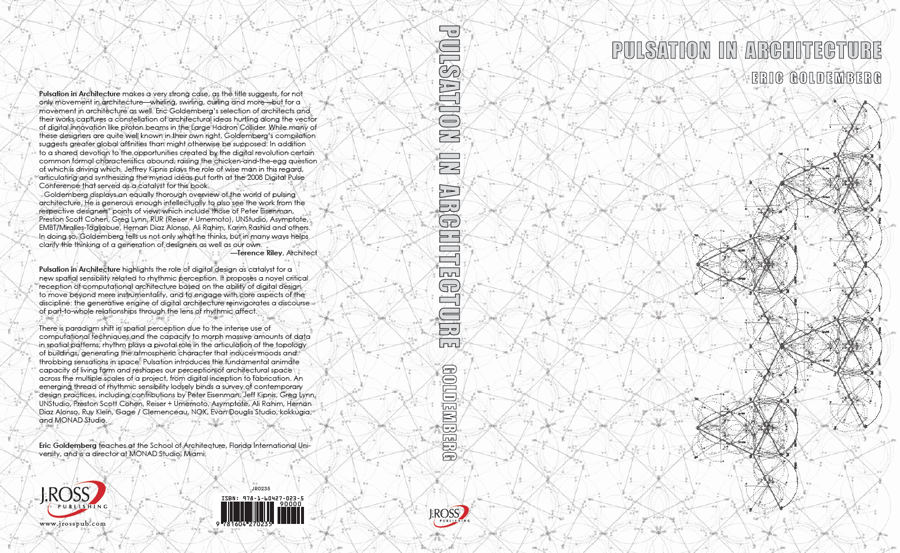 Pulsation in Architecture
Pulsation in Architecture highlights the role of computation as catalyst for a new spatial sensibility related to rhythmic perception. It proposes a critical reception of digitally driven architecture based on the capacity of digital design to move beyond mere instrumentality, engaging with core aspects of the discipline. The generative engine of computation reinvigorates a discourse of part-to-whole relationships through the lens of rhythmic affect.
There is a paradigm shift in spatial perception due to the intense use of digital techniques and the ability to morph massive amounts of data into spatial patterns. Rhythm plays a pivotal role in the articulation of the topology of buildings, generating the atmospheric character that induces moods and throbbing sensations in space. Pulsation introduces the fundamental animate capacity of form and reshapes our perception of architectural space across multiple scales of a project, from digital inception to fabrication. An emerging thread of rhythmic sensibility binds loosely a survey of contemporary design practices, including contributions by Jeffrey Kipnis, Peter Eisenman, Greg Lynn, UN Studio, Preston Scott Cohen, Reiser + Umemoto, Asymptote, Ali Rahim, Hernan Diaz Alonso, Ruy-Klein, Kokkugia, Evan Douglis and Gage Clemenceau. 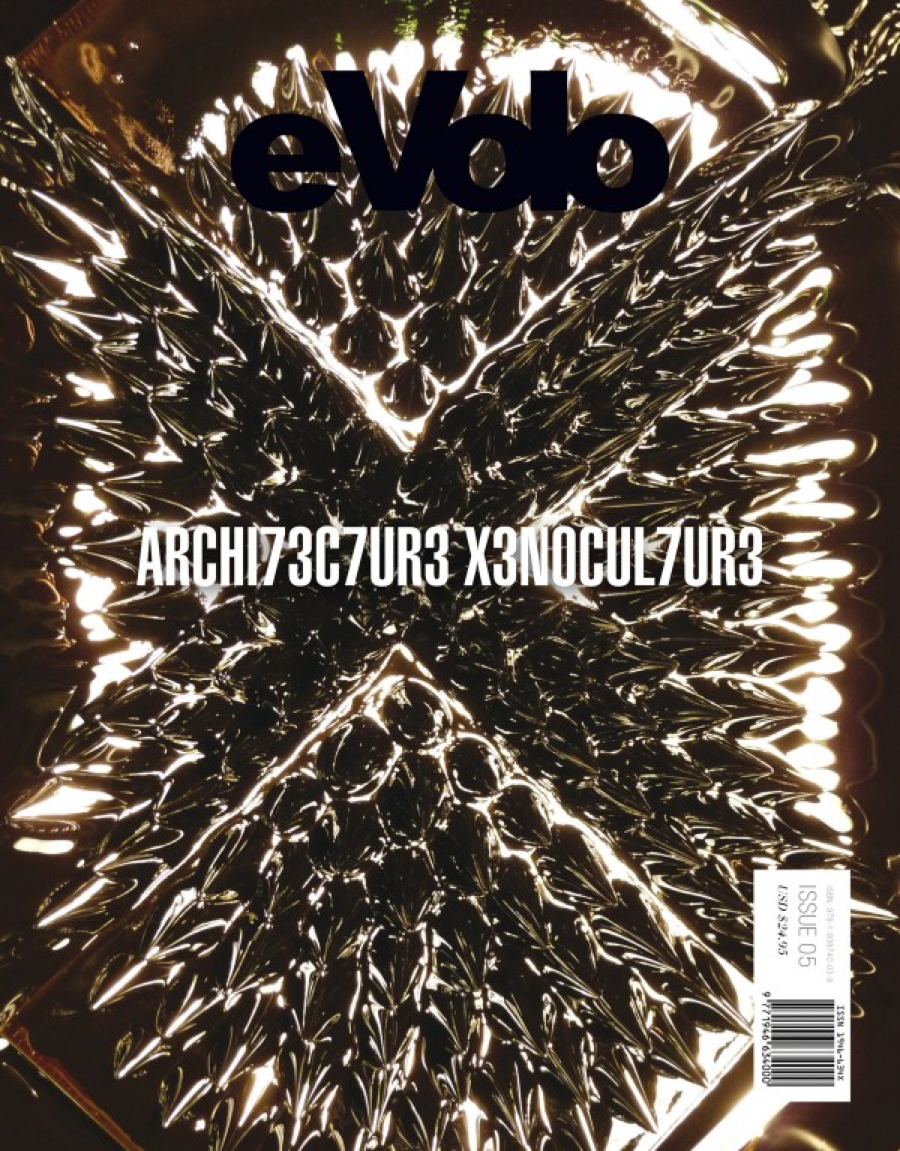 Architecture Xenoculture
Xenoculture is a term coined by Iranian writer and philosopher Reza Negarestani that describes the need for embracing and exploring the unexpected, the alien. In this book we borrow the idea and explore the realm of Architecture Xenoculture — the work of architects, artists and designers who detach from everything that architecture is supposed to be and look like, including preconceived forms and aesthetics, to look into new architectural and design possibilities. An architectural form that emerges from mathematical processes and new material explorations and proposes something never before seen — an aesthetic yet to be determined.

Juan Azulay is award winning architect, filmmaker, curator and media artist born in Argentina and working in Los Angeles, California. He is the creative director of L.A.-based MTTR MGMT and author of Architecture Xenoculture.

Among his most recognized work is a collaboration with Oscar-winner Guillermo Navarro for film work, as well as No Wave legend Lydia Lunch, for a film-performance directed in real-time titled “Flood Stains”, featuring an installation by Azulay himself called “Vivarium” (featuring robots, video, salt, biological organisms and an ABS enclosure) and a ‘bacterial opera’ by Lunch, a reinterpretation of ‘In Spite of God’, a product of her own collaboration with Omar Rodriguez Lopez of The Mars Volta.

Azulay has also designed seven award-winning buildings including the Northview Gymnasium and the Glendale Library in Los Angeles, California – as well as the Beauty Envy headquarters in Miami and the Aquaterrari for the New Barcelona Zoo.

Juan’s work is widely published and is owned by the MAK Museum in Vienna and the ACE Museum in Los Angeles. He has also worked for Frank Gehry.